Terrorism Is Not A Religion...It Is Not Islam 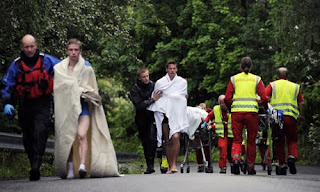 My heart goes out to all the families of the 77 innocent victims (reportedly killed so far). I watched in pain and dismay the news about the Oslo blast and the Utoya Island shooting as many around the world did. Yet as the news was being reported, fingers were already pointing at Muslims, Islamist militants, al Qaeda...etc. As much as the loss of lives trouble me, so did accusing Muslims.

David Crawford ran an article on the Wall Street Journal where he argues that it was most likely Islamist extremists. Another article ran on the Guardian by the title "Oslo bomb: suspicion falls on Islamist, where Peter Beaumont blatantly accuses al Qaeda and mentions Yemen (my country)! The article was removed the next day, thus the broken link and replaced by this one "Norway attacks suggest political motive".  Jennifer Rubin's article on the Washington Post asserted that Muslims were responsible for the Norway bombing. Yet that article was neither removed, corrected nor updated as James Fallow noted. And this just to cite a few.
As more investigations were made, news unfolded that the suspect was a tall blond male who had Nordic features. Eventually we knew more, that his name is Anders, aged 31, had a  Facebook page with postings, uploaded a disturbing youtube video, has a Twitter account with one tweet (yet keeps piling followers!), that he is Norwegian, a right wing extremist, a conservative Christian and an anti-Islamist.
These were my tweets in the past two days:
"Terrorism has no religion, race, or country. Terrorism is everyones enemy" and
"Extremism, Racism & Terrorism is Condemned and Rejected no matter what Race, Religion, Region, Organization or individual is behind it".
I also added: "Norway Oslo blast and Utoya shooting wasn't described as a terrorist act in most media? It seems this label is exclusively given to Muslims."

Some tweeted back that the definition of terrorism is not aplicable in this case because the act was carried out by one individual. Well if killing 77 is not an act of terrorism than what is? And had that one individual been a muslim, wouldn't the term "terrorist" have been flashing all over him? In fact not all terrorists are Muslims.
Why has terrorism become linked to Muslims only? Why are Muslims the first to blame for any terrorist act? Glenn Greenwald  highlighted this point in his article called "The omnipotence of Al-Qaeda and the meaninglessnes of "Terrorism". There is also a hashtag trending on twitter called #blamethemuslims.

The Norway massacre highlighted the Islamophobia that most people have but don't like to admit. Others like the Norway bomber don't deny it, he actually admits his extreme hatred towards muslims. Islam is not al Qaeda! The vast majority of muslims condemn it and hate it for giving Islam this association, especially after 9/11.
There are 1.5 billion Muslims in the world, a fifth of the (7 billion) Earth population. The majority of Muslims can not be labelled according to violent actions of a few extremist.
Islam in Arabic means submission to God's will, and derives from a word meaning Peace, "Salam". Islam is a religion of Tolerance, Equality and Compassion. There are a lot of misconceptions about Islam that might lead people to fear it. And hence one should make a little effort to know and learn more about Islam before passing judgment.


There is nothing in the Holy Quran that says one should kill. On the contrary there is a verse in the Quran that explicitly says: "the one who kills a soul not in retaliation for murder or (and) spread of mischief in the land it is as if he had slain mankind entirely. And whoever saves one it is as if he had saved mankind entirely" Chapter 5, Verse 12.  Also the Prophet (Peace Be Upon Him) said "The biggest of Al-Kaba'ir (the great sins) are 9, (1) to join others as partners in worship with Allah, (2) to murder a human being, (3) to be undutiful to ones parents,...etc
Islam acknowledges all prophets including Moses and Jesus. Therefore Islam actually encompasses all previous religions (Judaism and Christianity) and does not oppose them. A muslim is not a true believer unless he believes in all of God's Messengers and the sacred scriptures. Virgin Mary is mostly esteemed in Islam and has a status unequal to any woman. An entire chapter (19) in the Quran is named after her "Maryam" and recounts her story.
If only we just make a little effort to accept, understand and respect each other, the world would be a much better place. Peace to all.