In Remembrance of Yemen's Ibrahim @imothanaYemen

Today I am sadly mourning the death of a friend I got to know through twitter as @imothanaYemen. Although I never met him personally, only virtually, he was one of those people who cross our timelines and into our lives and leave a huge impression. Ibrahim Mothana was a young 24 year old prominent activist and writer from Yemen whom I first followed on twitter and was very impressed by his depth and wisdom at such a young age. He was the Co-founder of Watan Party and Arab Thought Foundation 2011 ambassador. Although Ibrahim was not a founding member of @SupportYemen, he certainly was an honorary one, contributing to debates and moderating google hangout discussions with the independent youth in Yemen's national conference, part1, part2 and part3 (Arabic).

Ibrahim was a brilliant speaker, a great thinker, a gentle friendly person, a witty character who inspired us in so many ways. He did so much for Yemen in his short lived, yet impactful, life and had hoped to accomplish much more. His dreams for Yemen were bigger than life. Ibrahim's sudden death is truly a great loss for the country and for all those who knew him. He died peacefully in his sleep. May God have mercy on his soul and may he rest in peace.


We will never forget Ibrahim's sense of humor in explaining Yemen's politics as a monopoly game: 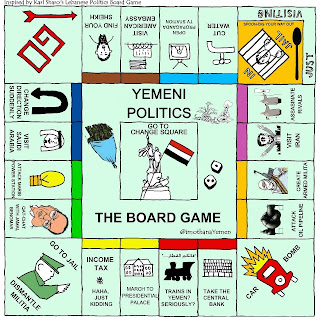 Nor his Alicyclopedia explaining the many powerful Ali's in Yemen: 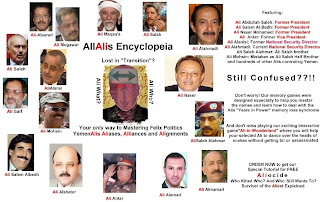 Nor the work of foreign journalists in Yemen: 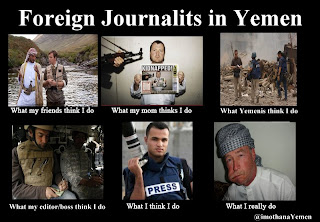 This is a summary of who he was as posted in his linked-in profile:

"Ibrahim is a 24-year old writer, activist and social entrepreneur from Yemen. He started writing at the age of 12 and his commentary has been featured in numerous publications, most notably, The New York Times, CNN and Aljazeera English. Ibrahim is a co-founder of Watan Party and Yemen Enlightenment Debate.Ibrahim has successfully worked in launching many projects and initiatives, and implemented several awareness creation programs in local communities around Yemen. He gained considerable experience working and volunteering with many national and international organizations, including the UNESCO, World Bank, Arab Thought Foundation, Human Rights Watch and many others. He was the youngest international monitor in the 2006 presidential and local elections in Yemen, as well as the 2012 presidential election in Egypt and the Public National Council election in Libya. He has a voluntary work experience in Ethiopia, India, Japan, Germany and other countries.In 2010, Ibrahim became the youngest member of the Arab Thought Foundation Advisory Committee, which is constituted of a group of distinguished business and academic intellectuals from the Arab World, providing the foundation with guidance on its operation and a range of critical matters. Ibrahim is also an Arab Thought Youth Ambassador, a Global Changemaker, Oxfam Action Partner, Swedish Institute YLVP alumnus and a UNESCO young ESD voice. He was a speaker at many international events, including the UNESCO general conference, World Economic Forum on the Middle East, Istanbul World Forum, Jeddah Economic Forum, the Yemen in Transition conference at Harvard University and the Tällberg Forum.Ibrahim studied Business Management at the University of Science and Technology and is currently studying Social Innovation at Lund University in Sweden. He successfully completed courses in different fields and holds two diplomas from the United Nations University in Tokyo and Amman."


Good bye my friend, gone so young, yet never forgotten...
Posted by NoonArabia at 1:08 AM