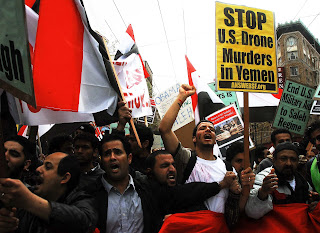 The US-Yemen relationship has become a hot topic recently, especially after former President Ali Abdullah Saleh, the man whom the US relied on and strongly supported in it's fight  against "Qaeda" recently stepped down. According to Ibrahim Sharqieh, a conflict resolution expert at the Brookings Doha Center who writes extensively about the conflict in Yemen, "in the past, over 90 percent of U.S. financial support went to support security and military institutions to fight al-Qaeda". The Saleh regime, opened Yemen's land, air and sea for US strikes against Al Qaeda by exploiting it's threat, taking advantage of US counterterrorism policy as a cash cow for its own survival and at times even fed the US misleading intelligence to combat its political opponents. Jeremy Scahill, an investigative journalist and national security correspondent for the Nation who writes often about Yemen, points out in his last piece in the Nation "for years, Saleh allowed the United States to regularly strike against AQAP in Yemen, and US Special Operations forces built up the specialized units, run by Saleh’s family members, that were widely seen as US surrogates'. He adds "rather than fighting AQAP, these US-backed units—created and funded with the explicit intent to be used only for counterterrorism operations—redeployed to Sanaa to protect the collapsing regime from its own people."

Yemeni journalist Shayi was the first journalist to allege US involvement in authorizing dropping of cluster bombs on civilians in Yemen, he was detained and sentenced to 5 years as a result. Amnesty International’s Deputy Director for the Middle East and North Africa, Philip Luther pointed “there are strong indications that the charges against ‘Abdul Ilah Shayi’ are trumped up and that he has been jailed solely for daring to speak out about US collaboration in a cluster munitions attack which took place in Yemen", in December 2009. Days after  he was sentenced in January last year, former president Saleh granted the journalist a presidential pardon, but a phone call from President Obama has managed to keep him in jail until today.

Many analysts agree that the US policy in Yemen has predominantly been viewed from the terrorism prism, but one doesn't need to be an expert to notice that it has not been successful so far and has in fact backfired on the US. The use of drones on Yemeni soil to kill "suspected" al Qaeda leaders, the unjustified killing of a teenager and many other innocent civilians commonly referred to as "collateral damage" and the illegal detention of a journalist, has fostered more animosity towards the US.
Furthermore US's rethoric in supporting democracy in Yemen has been reflected differently in its actions towards the revolution, backing Saleh's corrupt regime and hosting him in the US under the pretext of "medical treatment" enraged many Yemenis. Mr. Gerald M. Feierstein's, US's Ambassador in Yemen, provocative statements against the youth and against the "Life March", calling for an end to the uprising in the military institution, and his last interview with journalist Tom Finn raised a lot of concerned question marks regarding the long awaited military reform and created more anti-American sentiments leading to a march demanding the ambassador to leave Yemen and the burning of the US flag.

The majority of Yemenis do not consider the US Ambassador an "honorary Yemeni citizen" but rather a detested "foreign diplomat" for many reasons besides those mentioned above. His personal relationship with the Salehs and the general feeling among Yemenis that he is the man currently running the show in Yemen, only adds complexity to the already complex US-Yemeni relationship.

US clearly needs to re-evaluate its counter-terrorism policy in Yemen by addressing the socio-economic underlying causes that produce terror. Rather than focusing it's aid solely in the fight against al "Qaeda" and continuing with the drone attacks which kills innocent people, alienates, angers and aggravates the general Yemeni public, giving extremists a motive to join militant groups, Sharqieh recommends that both the United States and Gulf states should change their trend in foreign aid in Yemen. They should "give aid that will provide genuine comprehensive development, helping job delivery, building transparent state institutions and work to fight corruption within them." He adds, "this would be the ultimate solution to dealing with terrorism and other security problems; dealing with the underlying causes that produce terror."
Finally the message to US Deputy National Security Advisor, John Brennan, is loud and clear violence only breeds more violence, its about time to make a change in the US policy in Yemen, and elsewhere, by trying to make friends rather than creating more enemies.

Related Links:
America's Dangerous Game (Video)
Washington's War in Yemen Backfires
An American Teen-Ager In Yemen
Yemeni journalist jailed after alleging US involvement in missile attack
Yemen: Shaye Commences hunger Strike
Detained Journalist On Hunger Strike To Press For Release
Butt Out: US Ambassador to Yemen Interferes With Protests
US has 'direct interest' in Shaye's case
Yemen: A story of lost foreign aid and future gains?
Deputy National Security Advisor John Brennan press roundtable
Tom Finn Interview with US Ambassador to Yemen Gerald M. Feierstein
A New President and an "American Sheikh' Deal With Post-Saleh Yemen
Recipe for Failure: American Strategy toward Yemen and al-Qaeda in the Arabian Peninsula
The civilian massacre the US neither confirms nor denies
Yemen - reported US covert actions since 2001
Yemen : Anger at Expansion of US Drone War
Why The U.S Is Aggressively Targeting Yemen

Posted by NoonArabia at 9:38 AM